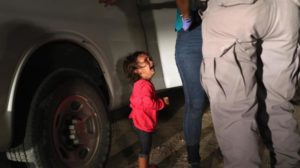 This is the picture of a two-year-old child crying as she and her mother are detained at the US-Mexico border. This is now the policy of the Trump administration. These “animals” continue to “infest” our country, so we must deter them by any means necessary. The New York Daily News put it best: “Callous. Soulless. Craven. Trump”.

How do we make sense of this? How do public servants allow this to happen? Here’s the point: “Put yourself in the room with immigration officials and try to imagine exactly which argument would convince you that separating children from their migrating parents would be a good idea.” David Brooks is decidedly more blunt: “The Trump administration immigration officials have become exactly the kind of monsters that conservatism has always warned against.”

Only, not quite. Brook’s characterization reminds me of “Eichmann in Jerusalem,” Hannah Arendt’s account of Adolf Eichmann’s trial for his role in the holocaust. From Arendt, I don’t see these officials as monsters, or inhuman, or stupid.  They are joiners in the Arendtian sense, idealists willing to sacrifice their own morality in favor of the larger movement to which they profess allegiance. Trumpism above all. Read the following description and think about Trump officials who defend the separation policy:

Such joiners are not stupid; they are not robots. But they are thoughtless in the sense that they abandon their independence, their capacity to think for themselves, and instead commit themselves absolutely to the fictional truth of the movement. It is futile to reason with them. They inhabit an echo chamber, having no interest in learning what others believe. It is this thoughtless commitment that permits idealists to imagine themselves as heroes and makes them willing to employ technological implements of violence in the name of saving the world.

Trump officials see themselves as warriors in the fight to secure our borders and save the country. They don’t think about what is asked of them, but they don’t have to. And they get all the support they need from Trump and his incessant tweets.

But what of officials at the border? What of officials who convert routine traffic stops into immigration arrests, or the judge who calls ICE during a wedding and sees the groom and best man led away in handcuffs?  What of officials willing to rip children from their parents and joke about it in the name of “national security?”

How do we explain them? Are they joiners in the same way? For their sake, I hope they are. Thoughtlessness is preferable to the alternative.