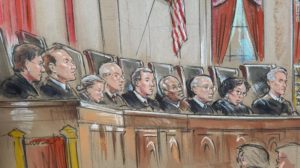 In Masterpiece Cakeshop v. Colorado Civil Rights Commission, Justice Kennedy chastised the Commission for its apparent hostility towards religion and persons of faith. Kennedy’s evidence boiled down to the following statement from a commissioner:

One reading of this passage is quite sensible: it is indeed “despicable” to use religion to justify hurting others. It is important to interpret this argument within the context of the passage and the examples the commissioner uses— slavery and the holocaust. Few people would disagree with that.

justice Kennedy disagreed. He argued that this passage disparages religion at least in two ways: “by describing it as despicable, and also by characterizing it as merely rhetorical—something insubstantial and even insincere.” That’s one reading of this passage, but I don’t think it’s the best one.  And the examples the commissioner used did not help clarify the point, but instead made the argument worse: “The commissioner even went so far as to compare Phillips’ invocation of his sincerely held religious beliefs to defenses of slavery and the Holocaust.” As a consequence, the Court narrowly sided with the baker.

I thought about this passage a few days ago, when Attorney General Sessions rose to defend the Trump administration’s  policy of separating immigrant parents and children at the border.  Sessions cited “the Apostle Paul and his clear and wise command in Romans 13, to obey the laws of the government because God has ordained the government for his purposes.” This was an unusual choice. Romans 13 had last been cited in the 1850s as a defense of slavery.

I wonder what Justice Kennedy thinks about that. Sessions’ statement is, at the very least, “despicable.”

This is not to say that Kennedy got it wrong, or right, in Masterpiece Cakeshop. Rather, it is to say that Kennedy tried to find an easy way to dispose of a difficult issue.  And as he read the Sessions’ statement, Kennedy should have been embarrassed, assuming he has any self-awareness at all.

Sometimes I wonder whether the justices believe half of what they write.

I also wonder whether we are as stupid as they take us to be.