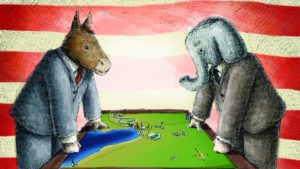 The US Supreme published its long-awaited decision in the Wisconsin gerrymandering case, Gill v. Whitford.  Gill could have been a landmark decision about American Democracy.  But the Court declined the invitation and sent the case back to the lower court to give plaintiffs the chance “to prove concrete and particularized injuries using evidence . . .  that would tend to demonstrate a burden on their individual votes.”  The decision is baffling for many reasons.

First is the Court’s use of history.  The opinion takes us back in time, to the 1960’s and Baker v. Carr through the 2000’s and recent gerrymandering cases that have refused to settle this question.  The Court concludes from this history that a legal standard is neither obvious nor preordained  by the Constitution.  But this history offers a more important lesson.  The one person, one vote standard, while maybe obvious as a matter of public opinion, was not demanded by the Constitution either.  Reynolds v. Sims picked that standard out of a hat, and then enforced it across the nation.  And here’s the thing: the response by the public and affected actors alike was nothing short of astounding.  And in the process, the Court’s public esteem grew.  There is no reason to suggest that history won’t repeat itself.

Second is the Court’s puzzling passivity in the face of a problem it has confronted before.  In Gill, the Court remands the case to the lower court due to a lack of standing.  To the Court, the plaintiffs have yet to show that they are individually harmed by the Wisconsin plan.   Standing scholars will no doubt have much to say about this.  But Gill is not new, nor terribly complex.  Again, a dose of history goes a long way.

Before 1961, the Court refused to decide these questions and hid behind the “political question” doctrine and the apparent “lack of judicially manageable standards.”  Baker v. Carr changed all that by the mere invocation of equal protection principles.  The Court only needed to posit that “[j]udicial standards under the Equal Protection Clause are well developed and familiar, and it has been open to courts since the enactment of the Fourteenth Amendment to determine, if, on the particular facts, they must, that a discrimination reflects no policy, but simply arbitrary and capricious action.” It was that simple.  Mere words did the trick.

A few years later, in Reynolds v. Sims, the Court went further and imposed a standard of population equality.  This meant that all districts must have the same number of people.  But the “intelligent man” on the Court new better.  As Justice Harlan wrote in dissent,

Stripped of aphorisms, the Court’s argument boils down to the assertion that appellees’ right to vote has been invidiously “debased” or “diluted” by systems of apportionment which entitle them to vote for fewer legislators than other voters, an assertion which is tied to the Equal Protection Clause only by the constitutionally frail tautology that “equal” means “equal.”

“One person, one vote” was not required, much less demanded, by the 14th Amendment.  But it soon became the law of the land.  And the country embraced it.

This is important for what it did to the political question doctrine. The doctrine was part and parcel of the Court’s passive virtues, ways to relief pressures not of the Court’s own making.  But Baker domesticated the doctrine. It brought within law an inquiry that served prudential goals. It demanded reasons for an inquiry designed to operate outside legal doctrine.  But that did not mean that there was no longer a need for the political question doctrine.  The Court must still have a way to rid itself of cases when prudence demanded it without giving the impression of fear and powerlessness.  And it settled on standing doctrine.

The conservatives on the Court want to return to the political question world that Baker left behind, a world where “judicially manageable standards” are unavailing.  They also do not wish to overturn Baker, so they must walk a very thin tightrope.  For proof, take a quick look at Vieth v. Jubelirer, the 2004 Pennsylvania gerrymandering case, to appreciate how hard Justice Scalia had to work to dismiss any and all standards offered by plaintiffs, social scientists, and dissenting justices alike.  The conservative justices do not want any part of this, but they also don’t want to concede any judicial ground, lest the “intelligent man on the street” come to think of them as weak or unprincipled.  Hence the need for the passive virtues.  Hence the need, that is, for standing doctrine.

Viewing Gill through this lens raises many questions.  Why does a unanimous opinion invoke standing doctrine and remands the case to the lower court to see if these plaintiffs are sufficiently harmed under standing doctrine?  Why not simply dismiss the case on standing grounds, as Justice Thomas argues?  More generally, why not simply invoke a lack of standards once and for all, rather than continue moving the issue forward?  Why the apparent need for prudence and the passive virtues here? What troubles the conservative justices in this area?

Gerrymandering cases are not different from any others.  So what in the world is going on, Justice Kennedy? What are you afraid of?