Making sense of the US embargo is quite simple.  Look no further than the Habana Hilton. 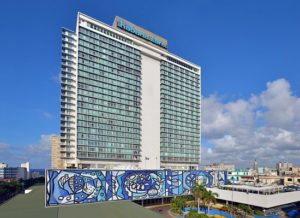 The Habana Hilton opened in March 1958 and was a “project of considerable symbolic value” for the Batista regime.  Here’s how architectural historian Peter Moruzzi describes the project:

Batista considered the Habana Hilton among his proudest achievements, its huge blue-lit rooftop ‘Hilton’ name announcing to the world that the eminent Conrad Hilton had confidence in Cuba’s future – that the country was a safe place in which to invest – and that tourists could now find in Havana the modern comforts they expected in a top international resort.

The Habana Hilton was a signal to the world, a statement about Cuba and its promising future.

But it all ended in January 8, 1959, when Castro’s motorcade entered Habana, went to the Hilton and turned the hotel into his provisional headquarters.   The state nationalized all hotels in October 1960 and permanently closed all casinos.  The Habana Hilton was renamed the Hotel Habana Libre.

The Embargo and its effect on the island

The nationalization of all hotels on the island followed an earlier decree, on August 6, 1960, that nationalized all 3 US oil refineries on the island and 36 sugar mills owned by U.S. firms.  President Eisenhower responded with partial trade sanctions.  The Castro government then nationalized another 382 businesses, which included “105 sugar mills, 13 department stores, 18 distilleries, 61 textile factories, eight railways and all banks, save the Royal Bank of Canada and the Bank of Nova Scotia.”  President Kennedy expanded the embargo and made it official on February 3, 1962, on the view that “the United States, in accordance with its international obligations, is prepared to take all necessary actions to promote national and hemispheric security by isolating the present Government of Cuba and thereby reducing the threat posed by its alignment with the communist powers.”  The embargo continues to this day.

The effects of the embargo are indisputable. According to Human Rights Watch, the embargo has “caused considerable harm for the Cuban people” and should end.  Amnesty International also calls for an end to the embargo, due to the “negative impact of the embargo on the economic and social rights of the Cuban population, affecting in particular the most vulnerable sectors of society.”  Cuba argues that the embargo has cost the island economy over $1.1 trillion dollars and considers it a genocide under the 1948 Geneva Convention and a violation of international law and the U.N. Charter. Notably, since 1992, the UN has passed a non-binding resolution calling for an end to the embargo.  Last November, only the US and Israel opposed it.

In case any doubts remained about the reasons behind the embargo, President Trump dispelled them with his answer to a reporter’s question about whether Kim Jong-Un is  “open to more economic freedom?”  Here’s Trump’s answer:

But that was a version of what could happen, what could take place. As an example, they have great beaches. You see that whenever they’re exploding their cannons into the ocean, right? I said, ‘Boy, look at the view. Wouldn’t that make a great condo behind?’ And I explained, I said, ‘You know, instead of doing that, you could have the best hotels in the world right there.’ Think of it from a real-estate perspective.

So here’s the future to better diplomatic relations with the United States: open your markets and allow US interests to come into the country.  This is true even for North Korea, one of the original “axis of evil” countries.  This may also be true for Cuba.  Forget human rights; the US doesn’t really care about that.  All it needs to do is bring back the Hilton.

The US does not want Habana Libre, sovereignty be damned.